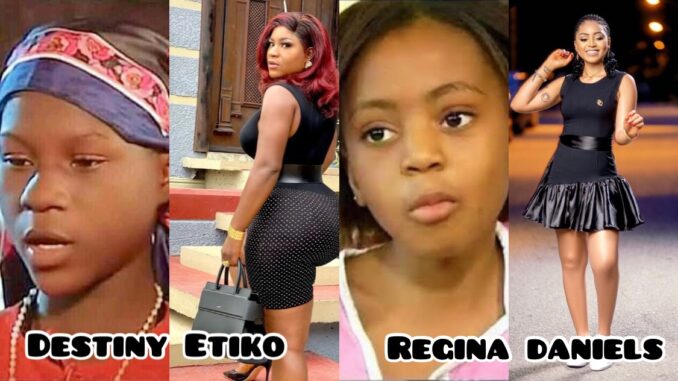 Some of our favorite celebrities started their acting career at a young age. These celebrities inspired us during their childhood days with the unique characters they display in the movies they are featured in.

However, I will be sharing with you 4 beautiful actresses that started their careers at a young age. Below are the actresses on my list.

Destiny Etiko is one of the famous Nigerian female actresses who is currently making waves in the entertainment industry. She is loved and cherished by most movie lovers because of how she interprets any movie roles given to her. The curvy actress is one of the talented actresses who started her acting career at a teenage age. Before making fame, she featured in several movies, she has featured in over 80 movies in her professional career.

Throwback pictures of the beautiful actress before making fame. Recent pictures of her.

Funke Akindele is a famous actress, movie producer, and director. One of her famous Television series is “Jennifer’s Diary.” The talented actress is one of the most sought-after actresses in Nigeria as she has been featured in over 200 movies. She started her acting career in 1998 when she was 21 years of age. Since her debut in the entertainment industry, she has achieved a lot and had won several movies and non-movie awards

Recent pictures of the beautiful actresses.

Just like Funke Akindele, Regina Daniels is married with kids. The beautiful lady is one of the most sought-after movie stars in Nigeria. She started her movie career at a very young age and has contributed to the success of Nollywood. She was featured in lots of blockbuster movies before getting married. She is currently 20 years of age and still active in the entertainment industry.

See some throwback pictures of the beautiful actress.

See how the talented actress looks in recent times.