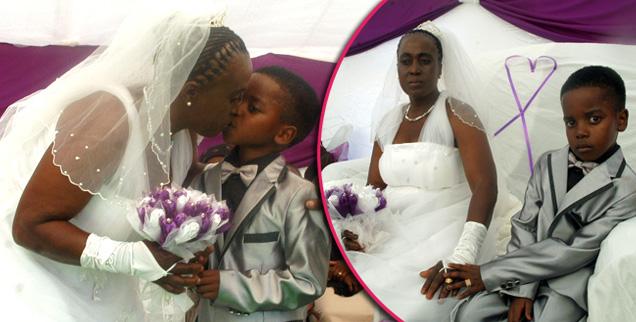 An 8-year-old boy in South Africa has married a 61-year-old woman and mother of five because it was his dead grandfather’s wish, and RadarOnline.com has photos of the newlyweds on the day they tied the knot.

Fearing a supernatural punishment from Sanele Masilela‘s grandfather, his family arranged for him to wed Helen Shabangu after the boy said he had been told by his deceased ancestors that he was to get married.

This is the first time this has happened in the family,” Sanele’s mother, Patience Masilela said.

“Sanele is named after his grandfather, who was never had a white wedding before he died so asked Sanele to get married. He chose Helen because he loves her.”

The family went all out for the $1,490 ceremony held in Tshwane, South Africa, in which little Sanele wore a silver and black suit and exchanged rings with 100 guests looking on — and a kiss!

“By doing this we made the ancestors happy. If we hadn’t done what my son had asked then something bad would have happened in the family,” Patience said, noting that the ceremony was not legally binding.

“I didn’t have a problem with it because I know it’s what the ancestors wanted and it would make them happy.”

Helen said of the marriage, “I would say that this is not wrong. Sanele was fine and he was happy about the ceremony and it was what he wanted. He was happy to get married and very excited.”

“When I’m older I will marry a lady my own age,” Sanele said.

“I told my mother that I wanted to get married because I really did want to. I’m happy that I married Helen — but I will go to school and study hard